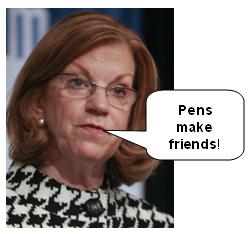 (Massachusetts) Senate President Therese Murray proposed a total ban on all gifts and freebies to doctors from pharmaceutical companies, a move that would make Massachusetts the first state in the country to ban such gifts outright.

The ban forbids the pharmaceutical industry from giving – and doctors, their families or employees from receiving – gifts from drug companies. Gifts include payments, entertainment, meals, travel, honorariums, subscriptions, even a pen with a drug company logo.The legislation would continue to permit distribution of drug samples to doctors for the exclusive use of their patients. Anyone who violates the ban could be fined $5,000, face two years imprisonment, or both, under the proposal.

Massachusetts law already prohibits gifts to legislators and other public officials of “anything of substantial value,” or anything worth more than $50.

Completely aside from the relative merits of this specific concept – gifts from pharma companies to doctors – I’ve got to ask the question: Once you do this, how many other sales practices will you ban? Is it only because pharma is the whipping boy de jour? Are there no other places where gifts are given out as inducements to influence decisions? Will we ban jewelry as an unfair inducement in dating practices?

Here, in my opinion, is the money quote from this article:

Peggy Kerns, director of the ethics center at the National Conference of State Legislatures in Denver, said Murray’s legislation is the first attempt at an outright ban on gifts to doctors that she had heard of.

Kerns said that many states are considering or have passed bans on gifts from lobbyists and industries to elected officials. “I think it’s legitimate and I’m sure the legislators are doing it for the public good,” she said. “I’ve just never heard of it, and it seems like the place to start would be within their own ranks.”

Amen. What are lobbyists, but political versions of drug reps? Clean up your own house first, then start looking at other industries…