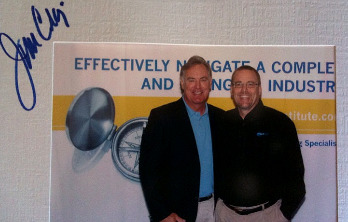 I recently had the pleasure of attending the annual Society of Pharmaceutical and Biotech Trainers (SPBT) Conference in Orlando.

For those not involved in SPBT, this is a society made up of (sales) training professionals across the spectrum of pharmaceutical, biotech, and medical device companies. While the conference structure has slightly morphed over time, it generally follows a pattern of featured keynotes in the morning, with various topical workshops during the rest of the day. The event runs from a Monday evening through Thursday morning, with peak attendance on Tuesday through mid-afternoon Wednesday. There is an exhibit hall of industry partners (vendors), of course, and evening events planned by the society and by various vendors.

I’ve been attending for about 14 years, and have seen the high points and the low points in the industry during that time. With all the recent mergers and the economic turmoil, this one had the potential to be a bit sparse, but a late boost in registrations pushed attendance over 500, which was encouraging for everyone involved.

Mike Capaldi of Sanofi-Aventis, currently serving as President of SPBT, did a fine job orchestrating the event (both beforehand and during), ably assisted by the staff who help plan and run the event each year. Circulating in the exhibit hall, I found a mixed-bag of reactions – some vendors were reporting excellent traffic, others were talking about molasses. That’s almost always the case, each year. I think it’s true that overall, the afternoon/evening social events in the exhibit area seem not to generate the kind of activity that used to be present 5-8 years ago. The seismic shifts in pharma, sales, and training continue.

I enjoyed the Tuesday morning keynote by Jim Craig, who was goalie of the “Miracle on Ice” 1980 U.S. Olympic hockey team that won gold in Lake Placid against overwhelming odds. And I confess freely – since this was my favorite sports moment of all time, you could probably have put the puck on the podium and just replayed this documentary and I would have enjoyed it (also, I met my wife the summer beforehand in Lake Placid, so I really do have a soft spot for that whole complex of events!) To be honest, I thought Jim’s motivational speech was a bit canned, but it was effectively delivered, and he spent the rest of the day mingling with people, taking pictures, and signing autographs in the exhibit hall. That was cool.

The Thursday keynote was also notable, in that it was the first-ever effective use of social networking technology during a general SPBT session. Orchestrated by Karie Willyerd, who was once responsible for employee/customer/partner learning at Sun Microsystems, the session addressed the role of informal learning in the organization. The content was quite good, but best of all was the use of a technology called PollEverywhere, which allowed interactive audience polling via text message, Twitter, or web. I’m a big fan of interactive systems during a presentation, but find non-stop tweetstreams to be distracting, and proprietary systems to be a barrier to entry. Using what everyone has – a phone – was a great “intro” into social learning, especially for a session on…social learning!

The Wednesday keynote on Managing Energy (not time) by Jim Loehr was quite interesting and I’m digging further into the subject with a book his group (Human Performance Institute) has published on the subject. At first blush, I think they’re definitely onto something, and this presentation put into words a few themes that have swirled around in my head for some time but which never quite came into clear focus before.

There’s no good way to give a summary to the variety of workshops that was offered, because I was only able to attend one per time slot, and two of them I led or co-led. I did enjoy the interaction in my session on Five Ways Social Media will Shape Your Future in Pharma, and a smaller group of us had a lively discussion in the Strategic Sourcing workshop (team-led with some colleagues from Proficient Learning and Clearpoint Learning). Downloadable post-session resources (for anyone!) can be found here: http://bit.ly/socialrx, including a free e-book on Getting Started with Social Networking.

Having been on the vendor side for many years, I’m always very conscious of the facility – namely, the ease of navigating between general session rooms/breakout rooms/exhibit halls, overall “feel” (claustrophobic? open?), and general access to social diversions. In this respect, the Gaylord Palms was outstanding. The layout was straightforward, all the dimensions were “big” and roomy, and there was a nice variety of restaurants and shops. It would be a nice place to bring a family while attending a conference – highly recommended.

Time in the exhibit hall, with many valued industry partners and friends, is always a delight. Getting up to date with colleagues from NxLevel Solutions (where my doppelganger resides), Pedagogue (need on-line testing? They’re your solution!), Proficient Learning (with much laughter over dinner), Campbell Alliance (the first ever indoor boat social event at SPBT!), CMR Institute (my secret source for Mill Mountain Coffee!), Clearpoint Learning (great red ties this year), IC Axon, Illuminate, Eagle Productivity, Yukon Group, Informa (always so gracious – even if I failed twice at the basketball contest), Taimma (so glad you brought on Bill Ahern!), Locus, Peloton (best little backpacks ever!), Noggin Labs, Strategic Outcomes, Velocity, TBA Global, and others.

Scott Sauve, Steve Sitek, Bob Rodman, Brian Fagan, and the rest of the SPBT team are to be congratulated for pulling off a fine event.

Many others will say that they have the best clients and partners. They’re lying. I do. Just saying…

(Here’s an idea for a format change I’d like to suggest, to make it easier for vendors to introduce themselves to the broadest possible audience. That would be a pay-to-play Pecha Kucha session between 2 main sessions, where, let’s say, 10 vendors get to present their work/value to the entire audience in the “20 images in 20 seconds format” (accompanied by highly distilled verbal description) – and let the audience vote on the best one. It would be a fun and engaging way to weave the vendors into the staged sessions, while providing a creative way to give a “taste” of solutions).

Visit the Impactiviti Job Board