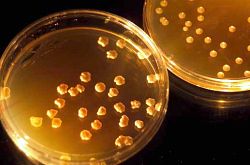 In a creative new move to increase market share, Behemouth Pharmaceuticals has switched from the practice of having sales reps leave drug samples, instead having them leave samples of communicable diseases.

“Look, we’ve taken a lot of flak over this practice of leaving drug samples, you know what I’m saying?” said J.P. MacRost, President and CEO of Behemouth. “People think we’re manipulating the healthcare marketplace, and besides, it hasn’t effectively increased market share. But at a recent executive retreat, it came to us in a flash of insight – what better way to increase the market for our drugs than to increase the number of diseased patients?”

Petri dishes containing an assortment of germs, bacteria, and proprietary “disease accelerant” substances are being left near ventilation openings in exam rooms throughout the United States. The selected pathogens are specifically configured to help trigger disease states addressed by Behemouth products. The branded petri dishes, once used, can then be used as very nice coffee cup holders on desks, prominently displaying the Behemouth logo and tagline, “Dishing it out for your patients!”

A sampling of independent healthcare professionals specially chosen by Behemouth for further comment seemed to give the new program a very positive ‘two thumbs up.’ “Our sample closet was getting a little crowded anyway, and we had more cures than we had diseases in this office. Now, with the Progressive Petri Program, we know exactly what diseases we’re going to be treating, and just what products to use for the set of maladies that have been assigned to us that we are seeing a lot of,” declared Dr. Fatladie Singh, of East Moline, IL.

Patient groups were outraged. Wynne E. Wigglesworth, spokesperson for The American Society of Outraged Patients (ASOP), declared “We’re outraged! This is outrageous behavior by these irresponsible drug companies. It will lead to further outrages, like leaving plague-infested pens in hospitals, or sprinkling E. Coli on waiting room chairs. The next time I see one of those Ken or Barbie doppelgangers in my doctor’s office, I’m going to pour forth my outrage all over their carefully-coiffed heads. Unless I get a nice mug or calendar out of it, of course.”

According to industry blog DrugWinks, this approach, while yet unproven, may be just what the doctor ordered for helping pharmaceutical companies reach their financial goals. “People have been hitting us for years on the supply-demand side – too many sales reps for the same amount of doctors, etc., etc….you know the drill. With the disease sampling approach, we can now even out supply and demand quite nicely – however much of a drug is in inventory at any given time, the number of afflicted patients can be ratcheted up to even things out. It’s capitalism at its finest.”

Thus far, very few physicians have been willing to take on the leprosy samples or the flesh-eating bacteria being offered by Behemouth’s Pfatal Pharma division; however, a few educational programs in Bermuda along with some very nice engraved rosewood pens may create an uptick despite concerns expressed by skittish office employees.

The Pharma Side
Copyright 2007 Impactiviti LLC