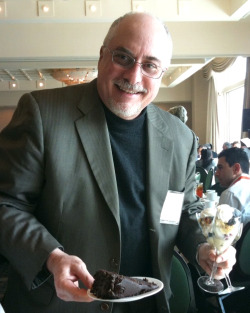 This week, I was privileged to take part in the 9th annual ePharma Summit, put on by the folks at IIRUSA. This event had the misfortune to be located in Philadelphia during the Smomaggeden III incident, so a number of folks (including me) felt compelled to bail out before the worst of the storm hit on Wednesday.

Nonetheless, the conference was exceptionally well-attended – sold out, in fact. This was encouraging after seeing such slim crowds at pharma events last year.

I went to the Advanced Social Media Boot Camp the first day (Monday), which featured such speakers as Shwen Gwee (Vertex Pharmaceuticals), Mel Halkyard (Eli Lilly), Fabio Gratton (IgniteHealth), and Lance Hill (Within3). Most helpful in my mind were the group exercises, led by Fard Johnmar (Enspektos), where we broke off into roundtables and brainstormed social media approaches to various scenarios. The discussions were lively and creative. The Within3 folks kindly hosted a very nice networking reception that evening (thanks, Lance and team, and congrats on the launch of the ACG GI Circle community!), which was followed by a wonderful Tweetup on the ship/restaurant Moshulu, generously hosted by Pixels and Pills.

Pixels and Pills also conducted a series of mini-interviews during the conference; I had a chance to give my 2 cents here. They also recently launched a cool application recently called the Health Tweeder – check it out!

The meals were excellent, though some folks encouraged statin use by overdoing it on desserts. No names (like, for instance, John Mack) will be mentioned about the guilty…

The main conference, running Tues-Wednesday, was packed with a solid variety of presenters. Highlights for me included Dennis Urbaniak‘s (Sanofi) thoughts on innovation, and the presentation of UCB’s Epilepsy community. The most negative twitter back-channel feedback surrounded PBS Health Analyst Susan Dentzler’s overview of the Democratic health plan in Congress – relevance to eHealth was essentially non-existent and the tone was quite partisan.

Most touching on the heartstrings was the description of Acorda Therapeutics efforts to support the MS community, well in advance of the launch of any commercial product.

Kevin Nalty (“Nalts“) talked about video and YouTube, in his usual entertaining way, and comScore’s John Mangano tossed a bunch of intriguing statistics on the screen, though there seemed to be a veil over any raw data underlying it.

I left early the next morning, in advance of the worst of the storm, and experienced something I’ve never seen before – uncrowded major highways between Philly and North Jersey in the morning! For those who stayed (about 100), there was a shortened day of presentations, and for some, an extra night at the Hyatt Penns Landing as it was not easy to escape Philly by any means as Wednesday wore on!

By and large, the audience was fairly quiet throughout the conference – Q&A, discussion, and live engagement were muted for whatever reason, which is a shame. There was a good number of exhibitor/sponsors, including Klick Pharma, MC3, and Kyp – all of whom provide solid pharma eMarketing solutions.

What was the tone regarding the use of social media in pharma? By and large, though there is still uncertainty surrounding the FDA stance, I sensed more of an atmosphere of inevitability – a bit less of “if” we’ll use social networking, and more of “how.” That’s a good thing. J&J launched a couple of new initiatives, in fact, in the days surrounding the conference. I’m looking forward to more tangible and creative initiatives in 2010 that will help break down the barriers of fear and demonstrate how these technologies and approaches can ultimately make for better healthcare.