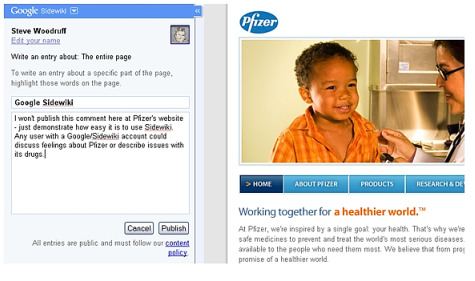 Take a look at the screen shot below, from Pfizer’s homepage. Believe it or not, I, or anyone else, can now leave comments “on” any website (such as Pfizer.com) using a new tool (currently in beta) from Google, called Sidewiki.

While the use of Google’s Sidewiki has ramifications across the entire web, for every type of site or industry, I’m going to focus here on the pharma industry. Because in pharma, it’s all about controlled messaging via corporate sites, and by and large, the idea of people being able to freely comment on (just about) anything is anathema.

The locus of control has just shifted. You can turn off comments on websites and blogs, but now, people can have their say, and the comments are accessible right there via Sidewiki when people come to your site.

How does this work? Google is not the first to try to allow user-generated commentary on any site, but they are certainly the biggest and most sophisticated. All you have to do is have a Google account, download the Google toolbar for your browser (currently IE and Firefox), and activate the Sidewiki capability. That’s it. More detailed explanations of how it works and how to get started are here and here.

I decided to go to fellow blogger John Mack’s site and leave a Sidewiki comment there (above). Now John allows (and welcomes) comments, of course, but with Sidewiki, that is irrelevant. And even for those sites where comments are reviewed before approval, Sidewiki allows commentary completely apart from the intervention or approval of the site owner.

How will this change the game with regulatory issues? Well, it’s a big monkey wrench. A pharmaceutical company already cannot control what people say about it, or its products, on various sites. But now people can express themselves with annotations that are, in essence, sidebarred on company sites! Can a company be held liable for, say, off-label discussions that happen on Sidewiki in association with a product site?

It’s a good thing that the FDA will hold hearings in November about the use of social media/Web 2.0 in pharma communications, because we now have a new issue to put on the table. How does industry and its regulatory bodies view user-generated content that cannot be controlled, yet exists in conjunction with company-sponsored sites?

Some question whether the adoption rate of Sidewiki will be significant enough to make a huge difference. It’s a fair question, but I don’t believe that’s the point. The really important thing is: the wall has been breached. I’m not sure there’s going to be any going back as this kind of (pretty much inevitable) approach evolves – it’s a Pandora’s box.

The rules of the game just changed again. There’s going to be a lot of mixed feelings about this one…

UPDATE: Fellow industry blogger Phil Baumann was thinking about the same theme today! Read his valuable thoughts. And Wendy Blackburn chimes in with some good input on what pharma can or cannot do about Sidewiki.