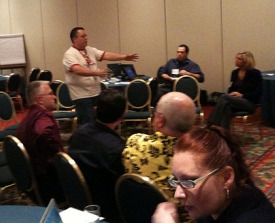 You know how everyone wants to claim that they were physically present for earth-shattering historical events?

Well, in 20 years or so, pharma people across the globe will all claim that “I was there!” for Digital Pharma 2009.

OK, that’s a bit of hyperbole. But I WAS there this week, and so it’s time for a re-cap. Was it earth-shatteringly historic? Perhaps not. But did we move outside of the normal pharma conference comfort zones? Yes, I believe we did.

First, some background. My co-conspirator in the Pharma Social Media Aboveground, Shwen Gwee, decided to put on what (I believe) was the first pharma-focused “unconference” this spring, up in Cambridge, MA, in conjunction with HealthCamp Boston. It was an experiment, as pharma folks are not used to less-structured approaches to conferencing together. While it did not go “all the way” into true unconference format, it was a great taste of the potential for a more crowd-sourced approach to content and discussion. Jason Youner of ExL Pharma (conference organizers) attended, saw the benefits, and had the vision to transform Digital Pharma 2009 (DP 2009) into more of an unconference format (ironically, Shwen and I had originally met at DP 2008, when we found each other twittering the conference in the obscure old days when that was not a common practice). Shwen was asked to chair the event, and a group of us started brainstorming the how-to….

For those not familiar with the pharmaceutical industry, the air we breathe there is full of centralized, controlled, regulated, measured, one-way 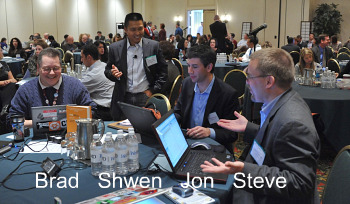 communications. Get the picture? We’re still in the evangelistic phase of encouraging social media adoption, and you can imagine that the informality of an unconference approach might be just a bit of a stretch. Nonetheless, a growing group of passionate early adopters has banded together (on-line and off-line) to try to move the industry into this century. And that core group, the Social Media Aboveground, has developed quite a camaraderie in the process.

So here’s what happened at DP 2009. Short story – we made good progress. Long story, with highlights:

– Most of the presenters made efforts to adopt a more informal style – walking into the audience, little use of podium, asking more questions to gain feedback and create discussion. My perception was that the relative success of this depended mostly on the charisma of the session leader, and also to some extent on the relevance or controversial nature of the content. Not all speakers can pull this off easily, and most pharma audiences are going to go through an adjustment period to loosen up and fully engage.

– Some speakers just gave their spiel, and some panels were just…panels. It’s going to take a while for both presenters and audiences to “get” a new way of interactive presenting.

– DP 2009 had the most active Tweetstream (outgoing & incoming) that I’ve seen yet at a pharma conference (see previous point for why that matters – deficient presentations did generate some snark!) As opposed to one year ago when Shwen and I were just trying it out, this conference was loaded with people using laptops and smartphones, and tweets were flowing freely. Some sessions had the chance to address questions from the Twitter (external) audience.

– Two panels were live-streamed on video. The regulatory panel had about 300 unique logins. This was a great step forward and I hope to see much more of this in the future.

– A couple of the sessions were experimental. One, featuring 2 Novartis employees (Erik Hawkinson and Melissa Clark), was a point-counter-point discussion. It was a bit stilted, and they ended up mostly agreeing after all was said and done, but it was a nice change-up. Another, featuring Fabio Gratton (IgniteHealth) and Xavier Petit (Shire), was an absolute hoot and had the audience laughing throughout. The two worked off of a soccer motif (Italy vs. France) and the accompany slides* to their point-counter-point discussion were hysterical. This was a great morning kickoff session. 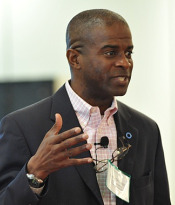 – Another fabulous morning kickoff was Craig DeLarge‘s (Novo Nordisk) engaging discussion on the Spirituality of Relationship Marketing. Craig has done a lot of work in the eMarketing and social media space and is one of the leading thinkers in the industry (besides being a really nice guy!) The audience interest was keen and the interaction (in-room and on-line) was quite robust. It was refreshing to have someone step back from the usual talk of metrics, compliance, and process, and focus on deeper, philosophical issues – such as are we seeking to build relationships, or just sell?

– Marc Monseau of J&J made a very compelling case that social media can, in fact, be done by pharma safely and effectively. Pharmaceutical companies that want to see how to move into social media really need to follow the lead of companies like Johnson and Johnson. This theme came back to the surface with a vengeance during the town hall meeting later (see below)!

– Heidi Youngkin (J&J) and Cynthia North (Bayer) were highly effective in provoking discussion and gaining audience interest. One of the surprises, however, came from outside the industry – a young diabetes blogger (Allison Blass) gave very valuable perspectives about patient/consumer engagement, and the audience clearly appreciated her contribution to the group. Allison’s involvement underscored something that came up multiple times during the 3-day event – we need to start bringing a wider range of people together for these conferences, from other divisions (like legal/regulatory) and even other industries.

– The highlight of the entire conference, however, was the true unconference Town Hall session at the end of the third day. This session was so lively that it carried right through the scheduled next session, which was folded in. Jon Richman wrote an excellent summary of this session, along with one of the key lessons that came out of it – read it here on his Dose of Digital blog (one of the best blogs in our industry, by the way). This session validated the entire approach – we moved through the event, by baby steps, into a growing comfort level with greater informality, and this final gathering showed that we can do “unconference”, even in pharma (note: I was there!)

Before I move on to a brief suggestion of what I’d like to see in the future for an IDEAL conference structure, a few other small notes:

– The Bridgewater NJ Marriott facility was pretty decent for this event. Easy to get to, perfectly adequate and convenient meeting rooms. The victuals were not quite up to the standard that I’ve seen in other events, but I’m sure that can be fixed. Wi-Fi was present and simple to login to, though I think we overwhelmed it a bit, esp. when the video stream was active.

– We had a great tweetup at the Maggiano’s restaurant across the street, sponsored generously by PixelsandPills. This was, to my knowledge, the biggest pharma tweetup  ever, and the discussion was loud and lively. Non-conference attendees traveled, in some cases, quite some distance to be there.

– The two pre-conference workshops (disclosure: I co-led one of them, with Zoe Elliott and Denise Barrett Quigley) helped set the table by incorporating creative table brainstorming exercises, to move away from the more traditional strictly didactic approach. This was very popular, and there was some Twitter back-channel trash-talking going on between the rooms as to which session was really better (note: ours was, of course! :>} As much as I really like Jon Richman and Fard Johnmar, who were leading that “other” session).

Now – based on this experience and the many other conferences I’ve attended in recent years – what would be the ideal conference structure for a pharma conference as we try to transform the way we gather and learn? Here are some of my ideas for a 3-day format that will incorporate both traditional and unconference elements:

:: Live video-cast of one or two key sessions daily

…or something like that. The format should allow us to draw a wider audience, hopefully including regulators for part of the time, and by providing on-line streaming and interactive opportunities, to reach a broader audience with specific professional (and thematic) interests.

Someone grab these ideas and make it so. Because I guarantee – I’ll be there!

Thanks to Jason Youner of ExL (and his crew), Shwen Gwee for organizing, and all of the many participants who decided to engage in this experiment together. It was a blast! 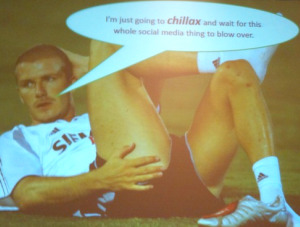 Oh – and we must not forget this hilarious video about the collision of social media and Legal/Regulatory from Nalts!