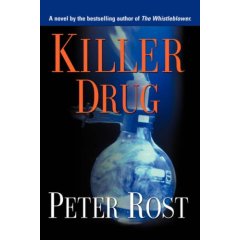 Peter Rost sent me a copy of his new book, a novel, called Killer Drug. Dr. Rost had previously released a book called The Whistleblower (reviewed on this blog last year) about his experience blowing the whistle on questionable marketing practices during his tenure with Pharmacia and Pfizer.

Since the book just came out, I thought I’d read it quickly so it could receive an “accelerated review.”

I won’t give the plot away, but in brief, there are shenanigans going in the top echelons of a drug company, and the novel’s protagonist, Alex McGraw, ends up finding out the shady stuff and blows the whistle. People start disappearing. Human chess pieces move and counter-move, and some end up out of play. Oh, and one lady gets painted blue.

In many ways, it was a pretty decent read – some good thriller action, a few gory sequences, ruthless characters getting payback in kind, etc. For a first novel, not bad.

I read a fair number of thrillers, and enjoy the craft of great writing, so there are clearly aspects of Killer Drug that reveal it as a rookie effort. Many of the characters are 2-dimensional; the good and bad folks are pretty much black and white with little nuance. Character development isn’t full-flowered; plot elements are a bit thin, and often far-fetched. Even a really bad pharma company wouldn’t be pulling the stunts attempted by those at Xenal Pharmaceuticals in this tale. Stylistically, I found myself sensing that the author was trying hard to craft his words – at times, the writing just felt a bit forced.

Beside seeing the good guys victorious in the end, and some bad dudes go down hard, you do get a bit of an education on some of the legal aspects of whistleblowing. The main protagonist and his lawyer/fiancee do get into discussions that spotlight how that area of the law works. Just in case you need it in the future…

There were also too many punctuation, spelling, and layout/formatting errors, which bothers me greatly – those in charge of book production should never allow that level of imperfection in a final product.

All in all – a nice summer time-killer. You won’t get college credit for this, but one thing you’ll take away is this – if someone offers you anything with “Convulsor” as an ingredient, probably you should opt to take a pass!