It’s not quite yet official, and we were sworn to secrecy until this morning, but the rumor is now confirmed – John Mack, one of the grandfathers of pharma bloggers, and Peter Rost, designated bad-boy whistleblower and pharma blogger, have decided to turn their verbal swords into plowshares, unite egos, and become a single blogger. In a Freudian slip, the news of these 2 Egos becoming one Superego was allowed to leak before the new official ID was established.

Now blogging under the name J.P. MacRost, the two have become 1 expansive psyche of blogging bluster, threatening to overwhelm the entire pharma blogosphere with their combined fulminations, self-promotions, and appeals to readership numbers.

In fact, they are about to announce their new combined site, The Pharma Egosphere, where the new MacRost will continue to seek world domination through blogging bloviation. 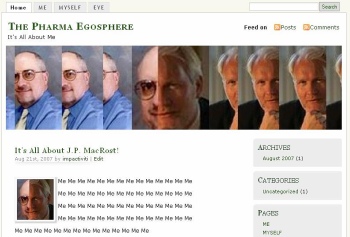 “It was a natural fit,” stated the former Peter Rost, once a pharmaceutical executive and now a full-time self-promoter. “John had nothing to offer, and I’m the best, so it made sense for him to join forces with me. In this case, the whole may not be equal to the sum of its parts, but he is certainly getting the better end of the deal. Plus, I have hair.”

Mack seemed to concur. “When you get beneath all the bluster and blather, you realize that, at bottom, Peter’s a pretty sparse fellow. Certainly all the fame I’ve given him will be better served if I latch onto the coattails I’ve created and try to find some substance to add to the formula. I mean, how much talent does it take to blow a whistle? My nephew did that when he was two years old!”

Rost, in particular, noted the synergies inherent in the merger. “After releasing ‘Killer Drug’, my new novel now sinking to the bottom of the charts faster than a breached submarine staffed with a crew of ballast, it was clear that the pipeline was pretty barren. The new J.P. MacRost will at least have John’s marketing newsletter, so that I’ll have a vehicle to keep my – excuse me, our – name in front of people on a regular basis.”

Both parties denied that the recent mud-slinging going on between their former blogging identities was merely a tactic to drive up readership numbers in order to make the merger appear more attractive. “Nothing could be further from the truth,” declared Rost. “Except your ridiculous novel,” chimed in Mack, who seemed to have a limited appreciation for the flight of literary fancy recently published by his new alter ego. “What a futile exercise in pseudo-thriller writing. What’d you do, give a bucket of money to some anonymous med ed writer to create it, in between his duties of making off-label slides for your former employer?”

Other members of the former Pharma Blogosphere (now made nearly invisible by the supernova-like expansion of the Pharma Egosphere) were not so sanguine about the blockbuster merger announcement. “I think there may be some issues with hot air monopolization, perhaps even requiring the purchase of CO2 ‘offsets’,” complained John Thursday, an anonymous blogger in some obscure country outside of J.P. MacRost’s area of residency. “In order for this to go through, they may have to shed some overlapping areas of content, like posting bogus survey results, or slapping up pictures of Sweden on slow news days.”

“I’ll miss the way they continually roast each other,” declared Pharma Grills, known to skewer overly inflated bloggers himself from time to time. “Perhaps the Jekyll-Jekyll dual personality dissociative disorder that is inevitable in this type of merger will lead to bitter disagreements within the same post, which could be fairly amusing, as long as we don’t get any more theme songs about novels and the like. I do hope he – they – whatever – continue to post stuff about Switzerland, or wherever they’re from.”

PharmaFlawed, another one of those anonymous-type bloggers, even went so far as to question whether Swedish spinmeister Peter Rost ever existed. “I kinda figured he was a persona made up by that Mack fellow years ago – you know, a sort-of executive avatar. You know how some corporations set up shell companies? I mean, how hard is it to find some old-time Swedish ABBA fan to pose for a few pictures anyway. I think I even stumbled into a Rost look-alike in Second Life and he answered to the name of of ‘Mack.’ All I can say is, it’s real suspicious-like.” 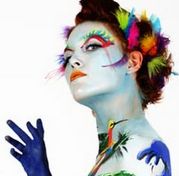 The scoop came from an anonymous blogging insider, June Dough, who e-mailed a juicy tip about the impending merger to Impactiviti and left some discarded blog posts hidden under a dumpster in Short Hills. June painted herself blue to disguise her real identity. (Impactiviti suspects that the “blue woman” may be a double agent, however – the Mack-Rost spin machine has been hyping this mysterious upcoming announcement for 2 days, trying to get maximum exposure for the leaked news…I’m feeling used!)