Rumors have swirled around Behemoth Pharmaceuticals for months, but a press release has been scheduled for 10 am April 1st to announce the launch of PharmaBoost, a novel new treatment for Pharma Industry Negativity Syndrome (PINS).

“It’s been quite an ordeal getting this drug through FDA approval, and quite frankly, we were on pins and needles throughout,” said a relieved J.P. MacRost, President of Behemoth. “What pushed it over the edge was the incredible uptick in negative and inflammatory reporting about the industry over recent months – the agency finally could no longer deny that PINS is a pervasive and virulent disease.”

In a triple-blind, placebo-controlled and half-decaff clinical study which took place at 200 selected Starbucks outlets nationwide, 45% of those who formerly reported themselves as “mildly disgusted” or “thoroughly enraged” at the industry suddenly reported feeling “downright warm-and-fuzzy” after a shot of PharmaBoost was added to their morning fix by their trusted barista. In addition, 22% described their feelings as “mildly buzzed about pharma” when a venti was downed with a double shot of PharmaBoost. There were scattered reports of customers asking for “statin sprinkles” or “metformin muffins” with their coffee, but this was viewed as a transient side effect.

“These results are startlingly good,” declared Merry Angle, who once wrote a highly critical book about the industry (since retracted and removed from bookstore shelves after an infusion of PharmaBoost was slipped into her Earl Grey tea). “In fact, I’m putting out a series of articles defending the relative costs of sales and marketing expenditures, since this great healthcare system of ours was built on the principle of unbridled promotion and profit-making. Every time I see the price of a prescription nowadays, I think to myself, ‘Wow…what a bargain!’ Now, just thinking about the pharmaceutical industry gives me a high like no other drug I’ve tried!” Peter Rost, industry gadfly and former blogger/critic, has renamed his blog “Give in to Authority” and now features puff interviews with CEOs of Big Pharma – the very ones he used to criticize in his whistleblower suits. In fact, Rost is now writing a new novel, tentatively titled “Swill yer Drug,” featuring a few surviving characters from his prior book (Killer Drug – now withdrawn from publication), who go about the countryside encouraging everyone to take their meds daily, in deference to the authority of their prescribing physician. “I don’t Question Authority anymore and neither should you!” declared an ebullient Rost, whose change of heart came after sipping a PharmaBoost-laced Red Bull during some boring legislation at which he was an expert witness. “In fact, this stuff makes me feel and look young again – maybe I’ll go back and apply for a Marketing job with one of these great companies again!”

Behemoth plans to launch a new social media site, “The Booster Club,” where pharmaboosters can share upbeat perspectives on the industry and talk appreciatively about their favorite high-level executives. A new ad campaign is also in the works, with huge displays of Big 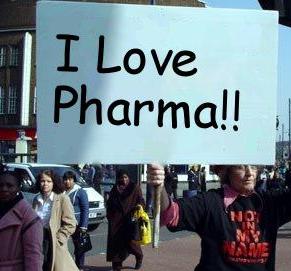 Pharma CEOs flashing up at Times Square, sequenced with the message “What else can $30 million buy you?” as former cheerleaders hand out PharmaBoost samples on the street, and Boosters stroll around with positive and upbeat signs.

PharmaBoost will be available in Regular size tablets for the general public, and Jumbo 12-packs for regulators, reporters, and Congressmen. An ultra-extreme infusion (the “Kennedy”) is currently under discussion with U.S. and European agencies.