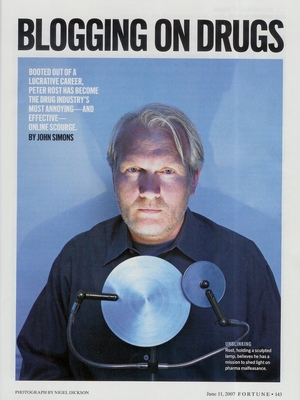 Fortune magazine, that is. The Whistleblower gets written up for his activities exposing wrongdoing among Big Pharma companies.

Rost’s many critics would love to be able to dismiss him as an embittered crank. But they can’t. The blog has clout. As a conduit for Big Pharma whistleblowers, it has taken some notable scalps. Earlier this spring, for example, Rost’s muckraking spurred congressional curiosity; federal investigators are now looking into AstraZeneca for Arimidex-related marketing irregularities. Another series of blog entries resulted in a government probe into Pfizer’s marketing activities. And a dispatch on dubious sales practices led to at least one sales director’s ouster.

[PHOTO: PHOTOGRAPH BY NIGEL DICKSON, UNBLINKING Rost, holding a sculpted lamp, believes he has a mission to shed light on pharma malfeasance.]