This week, I attended two conferences relating to pharma and eCommunications/Social Media. The MDRx conference (sponsored by IIR) was in Philly, and the Social Communications and Healthcare Case Studies and Roundtable event was held in NYC.

Instead of writing my usual post-event description, I decided to just spill my guts a bit on where things are at with pharma and social media, having participated in these events and interacted with so many people this week. In short: we’re making progress! Let me take you on a brief retrospective tour, then give some current perspectives… 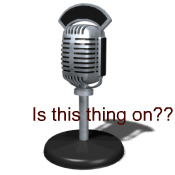 When I started pharma-blogging three years ago, as a cornerstone of launching my consulting business, it was lonely out on the Internets. A handful or two of us were blogging pharma (and only a few of the original crowd have survived), there was NO participation by people within pharma companies, Twitter was a distant dream, and Facebook was not yet mainstream. Even a year and a half ago, when I first started on Twitter, there was hardly anyone on that platform with a pharma focus.

All that has changed.

Nine months ago, I ran into fellow networker Shwen Gwee at a Digital Pharma conference, when he turned to me in the back of the room and asked, “Are you tweeting?” At that point, I had just begun live-blogging and live-tweeting pharma events, which was a novelty way back in 2008. Shwen and I became fast friends and pharma conference collaborators. In fact, this spring Shwen launched the first Social Pharmer conference in Boston, where we experimented with a more informal format, and a number of those who are trying to do pioneer work in social media attended. Still, as of early 2009, it was pretty easy to identify and list all the active pharma bloggers and Twitter users (<–that link is a good starting point, by the way, if you’re just getting started in pharma social networking). 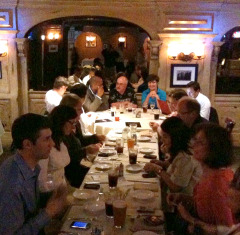 It’s not so lonely anymore. In fact, spontaneously during the BDI conference, a bunch of us planned a post-event lunch tweetup, and about 15 came in order to get to know one another better, socialize, and brainstorm. And that is one of the main goals of social networking. SOCIAL. NETWORKING.

Now, it’s getting hard to keep track, because so many individuals and companies are rushing into the social networking space. And I say: FANTASTIC! Join us – and if you need some help getting started, here is an e-book I put together for just that purpose, loaded with links and resources (including a pharma-specific Appendix).

We have a long way to go, but now, it’s not just consultants and agencies talking about it. Companies are jumping in, taking baby steps, learning. Ray Kerins of Pfizer (<–that’s him) gave a very encouraging presentation at the BDI event about the transformation going on in their global communications group. He’s someone to watch. Boehringer is using their Twitter account to interact, and Brad Pendergraph of Novartis is one of the most active and interesting pharma folks on Twitter.

In fact, if you want to know almost everyone who is doing stuff in social media, and where all the case studies are, leading agency thinker Jon Richman keeps a continually-updated wiki outlining the pharma social media space. Highly recommended.

One of the things to bear in mind is that, while the public case studies are still relatively slim, there is a lot going on behind-the-scenes with networked communications approaches that aren’t being much talked about. Internal blogs and social networks. KOL communities. Resource portals and discussion groups. Yes, we are all frustrated with the slow pace of regulatory comfort-level when it comes to new technology, and there’s a lot of fear abroad. but things are happening. We should start our considerations, not with ROI calculations and regulatory handcuff fears, but with two main questions: What are the needs of our audience? and, How can we add value?

I’ve seen all this before. There was the same slow uptake with Web 1.0 technology. And with eLearning. But eventually, we hit a tipping point where people stop asking “if?” and start asking “how?”

We’re getting there. We’re making progress.