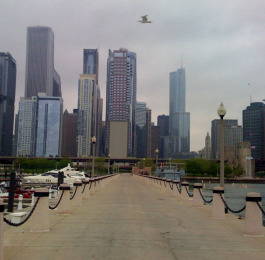 I got back last evening from the annual Society of Pharmaceutical and Biotech Trainers conference, held this year in Chicago’s Hyatt Regency (downtown). I think this was my 12th or 13th year at the event.

I’m tired! Happily so, however – I cannot remember ever enjoying a more terrific time of non-stop networking.

Attendance was down this year – not surprising, given the current economic climate, the travel cutbacks, and the recent M&A activity (reducing the number of pharma companies). However, this did have the effect of creating a greater concentration of senior people at the event, so the quality and decision-making power of those in attendance was pretty high on the scale. More signal, less noise.

The general sense of job insecurity was palpable. Lots of discussion around that. The awareness of the need to network more effectively was certainly higher than I’ve seen in the past.

Exhibit booths were smaller, and there was not much unique and exciting being shown by the vendor partners. There was some interesting newer stuff, but nothing earth-shattering or Big Buzz-creating. I have many friends among the vendors, a number of whom are my preferred partners when I make provider recommendations to clients. Talking shop with them is always great, and getting a clearer picture of some less well-known potential providers is always rewarding. The structure of the program adopted by SPBT this year allowed for longer concentrated times in the exhibit area, which has been a point of complaint in years past. That was well done.

Most imaginative and fun booth stunt this year was by EDC Communications, taking pictures of booth visitors and immediately printing out the image on the “cover” of a fake magazine. Cute. Yes, I have one.

The first keynote, by David Allen (the Getting Things Done guy), was pretty useful. He had some helpful suggestions for getting things “off your mind” (where they drain energy) and onto paper, then converted to action. It’s going to take some time to digest his material – I feel somewhat overwhelmed trying to process everything he said to help get us less overwhelmed!

The workshops were the fairly typical mix of good, OK, and meh. The one workshop that had my full attention actually spanned two time slots – it was put on by the folks at Fort Hill Company (Roy Pollock) and Genentech (Brent Kiff), with the less-than-exciting title of How to Increase the Return on the Same Training Investment. It was engaging, strategic, comprehensive, and smart. For me to stay through an entire workshop, it has to be very well designed and delivered. To stay for a double-header – that’s high praise!

I co-presented two workshops and one breakfast roundtable. One workshop, and the roundtable, was on professional networking. I was ably assisted by Jerry Clor (Roche) at both, with Don O’Guin (Pfizer) joining us for the Build your own Opportunity Network workshop. We had a very engaged group that has begun immediately applying the lessons! Follow-up materials for those who want to take steps to get more involved in social networking (including free downloads) are right here.

Bob Holliday (Boehringer-Ingelheim) was my co-presenter for the workshop, “But I Didn’t Sign up to Manage Projects!” This one seemed to be quite helpful to the audience, and follow-up download materials and forms are right here.

My friends at Yukon Learning treated me and some others to a rooftop experience over at Wrigley Field on a lovely Tuesday evening. Hadn’t been to Wrigley before, and that was a blast!

The Hyatt is nice enough as a venue, but it’s a maze – it’s two buildings separated by a street (tunnel on one level, skyway on another), and unfortunately, workshop sessions were in one section and the exhibit hall in the other. Sigh. At least it’s close to the waterfront, which is always wonderful for a day-end stroll. AT&T cell signal strength was anemic – my iPhone was useless in many areas. The SPBT staff, as always, were friendly and helpful, and the Hyatt staff were also exceptionally well-trained in friendly behavior toward guests.

So, that’s a brief list of “the facts”. For my business, as a matchmaker/broker (helping pharma training clients find optimal supplier partners, and vice-versa), it was simply a great time. Mine is a networking business, and having the chance to network non-stop with both clients and providers, and to gain insight, input, and (let’s admit it…) a bit of industry gossip is really a blast. I’ve gotten to know many fine folks over the years, some of whom are now friends and collaborators, and so for me, this was almost like a big picnic with great neighbors. So if I have a bit of a silly smile on my face today, you’ll know why…!