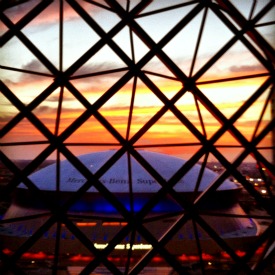 That’s how I feel after every SPBT (Society of Pharmaceutical and Biotech Trainers) conference, and this year was no exception. It is the most intense networking week of the year for me.

Now, after a weekend to recover and reflect, it’s time to recap. In no particular order, here is what struck me:

1. The venue, Hyatt Regency New Orleans (next to the Superdome downtown), has been beautifully re-done after Katrina. The layout of the three main floors we used was as confusing as could be (one of the employees called it, “our beautiful labyrinth”), but the exhibit areas and workshop/keynote rooms were all close together. That’s a big plus.

2. All three keynotes this year were excellent, each with a different, challenging focus. Michael Gelb was thought-provoking on how to think like Leonardo DaVinci – emphasizing the need for creativity (and attendees were given the opportunity to receive signed books by the author). Michael Abrashoff has a very impressive story about the role of leadership in turning around an under-performing Navy crew – rich lessons that could be immediately applied (and, signed books given away). Daniel Kraft did a NJ-speaking-speed fast-paced overview of where healthcare technology is heading – this fascinating topic should be covered at least once every year, because we all need to know where the puck is going. I would say that Gelb was the most skilled and entertaining presenter; Kraft was trying to cover too much at his lightning pace; and Abrashoff’s pacing and transitions weren’t quite up to the level of the quality of his story. But each session was high-impact and seemed very well-received by the audience.

3. Whoever thought of bringing on song-a-day-guy Jonathan Mann to compose a fresh song each day, performed before the keynotes, is a genius. His nutty songs (and visuals) about compliance and iPads got the audience rollicking. Great use of humor and creativity. Weird red shoes, but hey, that’s part of his shtick!

4. The SPBT organizers are in the midst of a 2-3 year transition bringing the organization and its events into the new era, and I saw significant progress in that regard this year. I loved the fact that the board members had advance-invite breakfast discussion sessions with various stakeholders. The iPhone/iPad conference app was a cool and well-executed addition. The SPBT booth area was spacious and designed for stand-up or sit-down meetings in a relaxed, New Orleans-themed setting. New growth and services ideas are on the table, and having had many discussions with SPBT leaders of the past years, I am confident that things are heading in some very productive directions, which will be even more evident next year. Kudos to Kevin Kruse and the entire team.

5. Exhibit traffic – sigh. This is a perpetual concern, and having been a vendor in the hall for 10 years (and a free-range consultant for six), I know that there are major ROI concerns when traffic seems light, as it did this year. Most (though not all) of the vendors I talked to were lamenting the downtimes, and the less-than-stellar traffic during the breaks. I wish I had an easy answer to this dilemma. I did provide some “guided tours” for clients who wanted targeted introductions to specific vendors and I’ll probably ramp that up more next year.

6. Food – this was New Orleans, where flavor and calories reign supreme! I don’t think anyone was going hungry. I was actually fearful about getting back on the scale when I got home. One small complaint – coffee and snack availability wasn’t as easy as I’ve experienced in past years.

7. Networking, for me, was exceptional this year. I enjoyed rich discussions with: Ceci Zak and her Sanofi colleagues; Paul Silverman; Bonnie Luizza; Mike Capaldi; Bob Holliday and the B-I crew; a number of folks from Genentech (including the engaging Carrie Schaal); Deborah Reid; a slew of friends from Merck (thanks for allowing me to scatter you during the Networking workshop); the Ferring crew (whose office is maybe 10 minutes from where I live); Vicki Colman; Dawn Brehm and Carol Wells; Debi Limones; John Sjovall and all the fine DSI folks; Chuck DeBruyn and Dawn Sidgwick; Dennis Merlo and Jim Trunick (true industry veterans!); and many more. On the vendor side, it was old-home week again, getting updated with so many friends made over the years, and seeing what new offerings are coming into play. I also got to lead a workshop session on Building Your Own Professional Opportunity Network, and that seemed to go rather well. We could have easily used another hour, I bet – especially with the in-room networking we sought to apply immediately!

8. Technology – well, there were iPads. Oh, and iPads. Plus, a lot of talk about iPads. Here’s the thing: just about every pharma sales force seems to be using or heading toward iPads, and hardly ANY companies really had a cohesive and comprehensive strategy (let alone digital infrastructure) in place before starting to roll them out. So, it’s time to backfill all this neat stuff with clearer vision and strategy. That will be an Impactiviti focus over the coming year.

9. There was a broader variety of workshop sessions this year, although I attended fewer of them than usual (preferring to spend additional time in the exhibit hall and in private meetings). The ones that caught my interest demonstrated the use of iPads for transforming live meeting events – essentially, replacing all paper. Some pretty cool stuff out there. A lot of the iPad apps rolling out are still first-generation level, but looking into the future, it’s quite fascinating.

It’s a tough time for pharmaceutical sales forces, and training & development departments. There have been a lot of cuts, both in personnel and in budgets. But this is a resilient group, and it’s good to see that SPBT is evolving into a more nimble and entrepreneurial organization. We’re going to need that mindset as we move further into this decade of change.

Oh, and here’s my blogevator pitch: if you’re bewildered by the plethora of potential vendors (and technology solutions), call Impactiviti (973-947-7429). You have plenty to do for your day job. My job is to find you the resources you need.

Impactiviti is the Pharmaceutical Connection Agency. As the eHarmony of sales/training/marketing, we help our pharma/biotech clients find optimal outsource vendors through trusted referrals.

Learn more about us here.