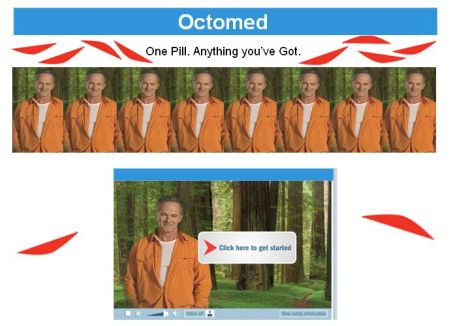 So BiDil appears to have failed – putting together 2 cheap generics into one expensive prescription pill just didn’t prove to be a winner for NitroMed.

And, Merck/Schering-Plough just took a very public beating for Vytorin results that were none too keen.

And, for Pfizer, Caduet has been an ongoing disappointment – the 2-in-1 Lipitor/Norvasc combo is efficacious in lowering cholesterol, but not in raising sales.

So is that the end of the combo drug? Hardly! These companies simply did not go far enough. Announcing the next logical advance in combo drugs – Octomed!

Why settle for a mere 2 drugs per pill when you can have 8? New Octomed treats virtually everything that can go wrong with you (except for inflamed appendix and toe fungus – please see label) all in one handy pill.

Octomed is a combination statin (lowers cholesterol), acid reflux neutralizer (deals with that pesky indigestion), oxycodone (who doesn’t have a little pain now and then?), anti-depressant (if you’re this sick, you’ll need it), anti-leg-twitching stuff (just in case), blood thinner (hey – everybody’s doing it), hallucinogen, and placebo (for general hypochondria).

Doctors everywhere are flocking to Octomed, because it only takes one prescription to address the vast majority of real, imagined, or anticipated medical problems. In fact, many doctors are now just writing 8! on their Rx pad, simplifying the odious task of interpreting scribbles in the pharmacy. 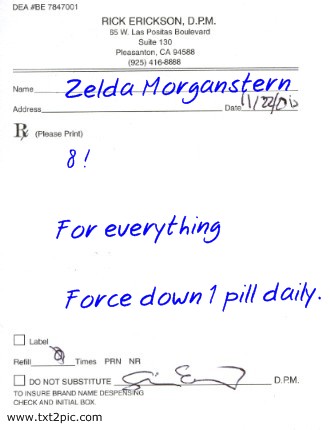 The unique Octomed pill design is unparalleled in medical history. The multi-faceted pill is square, and its unique 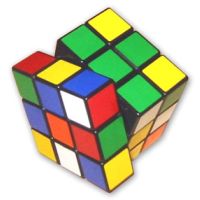 “color-cube” design allows the patient to visualize, if not world peace, at least the fact that he/she is getting a whole bunch of cool medicine in one whopping pill. For maximum psychological effect, physicians can even rotate the pill facets, thereby “optimizing” the treatment for each patient.

It is not recommended that patients “play” with their Octomed, as this may alter the delicate balance of substances carefully stratified in each pill.

In placebo-controlled studies, 15% of patients were actually able to swallow Octomed – most of the others required intubation and emergency surgery. Side effects included choking, bulging eyes, indigestion, and a vague sense of dread that something really bad was going down. All other symptoms and complaints previously described by the patient rapidly paled into insignificance, proving clinical success that was highly significant statistically.

Doctors and HMOs have embraced Octomed as an important way of preserving scarce healthcare resources, as those who are prescribed the treatment tend not to come back again. Ever.

The Pharma Side
Copyright 2008 Impactiviti LLC