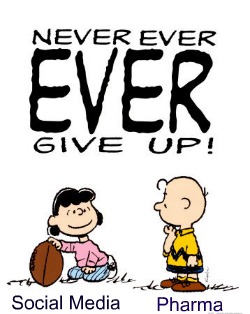 If you’ve followed my writing and speaking over the years, you know I’ve been a big proponent of social media as a vehicle for communications, network-building, and new business approaches. And I absolutely believe – more than ever – in the power and utility of digital networked communications

I was among the first in the pharma universe to begin blogging and tweeting pharma/healthcare topics. The first time I used Twitter at an industry conference, I wondered if I might be discovered and tossed out!

In fact, I even put together the first published list of pharma folks and companies active in social media – which, at the time, was a pretty small group! That number has since grown considerably, which is a very good thing.

As the industry has evolved, however, I can’t help but ask the question – is it time to give up on the idea of commercial prescription pharma interactively participating in the open, public social media space using current platforms? (please note the careful choice of words before having a knee-jerk reaction).

I’m not giving an answer – I’m asking a question. Here are the streams of thought feeding into this inquiry:

1. The FDA has shown zero readiness to give guidance about the use of on-line media in pharma communications. They are ready, however, to send warning letters about perceived violations in an ad-hoc fashion. This seriously inhibits pharma companies from getting involved. Regulatory fear does not go along well with open, public discussion.

2. The nature of current social media approaches and tools demands real-time interactive response and dialogue, out in the wilds of digital space. Pharma does not and cannot communicate that way.

3. Pharma companies tend to rotate commercial professionals (sales, training, marketing, etc.) through their job roles every 1-3 years. This means a constant default to short-term thinking. However, successful involvement in public social platforms demands long-term commitment and readiness to innovate. As soon as a little bit of expertise begins to accumulate, it’s time to move on to the next rung up the ladder (personally, I think that this, and the bondage of short-term quarterly profit reporting, are the two biggest hidden killers of pharma companies making true inroads in social networking).

We could go on, but the point is this: Public, interactive, real-time social media platforms and commercial pharma communications simply don’t mesh well. At all. And I don’t see that changing any time soon. Stuff you can easily say about other industries really isn’t going to translate well to pharma (as much as I like Chris Brogan, he’s out of his league on this post).

Is that a death knell for social media usage across all areas of pharma? Not at all. Non-branded communications can occur on existing public platforms, albeit often with a good dose of restrictions and care. Non-public networks (private communities) are a fruitful area of valuable involvement. Private, internal social networks (Yammer and the like) are potentially hugely useful apps for digital networked communications. One-way storytelling, while not fully social, can still add value, even in the public sphere (if done very carefully). Mobile apps that provide information or services are great – though again, they are using social-ish platforms in a less-than-fully-social fashion.

Also, the maturation of a platform like Google Plus could lead to more controlled communications to distinct, defined groups – and that is where the future could well be brighter.

Commercial, prescription pharma communications happen within thickly-walled gardens. The open, public social web is anything but that – and it’s not going to change for the pharma industry. Current platforms make it very difficult to marry the two. The future may well lie in walled social gardens, but existing approaches are still maturing through the wild west stage. Maybe we should expend less concern about “getting on Facebook” or Twitter, and architecting a social strategy that fits the industry – rather than trying to fit this square industry peg into a round, shape-shifting hole.

What do you think? Agree or disagree? Add your comment!