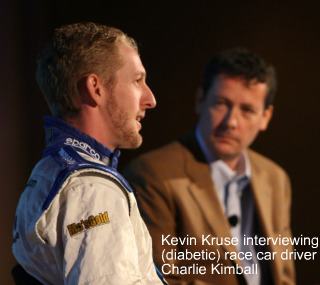 I was in downtown Philadelphia earlier this week for the inaugural ePatient Connection 2009 conference, a first-time event by the relatively new Kru Research (headed up by Kevin Kruse). I’ve known Kevin for years through our mutual work in pharma training/eLearning, but this was his first venture into organizing a conference.

Unlike last week’s Digital Pharma conference, which took encouraging steps in the direction of a more “unconference” format (review here), ePatient Connection had a more traditional, structured format. But unlike others – and I’ve been to MANY over the years – it was fresh, interesting, and basically…it rocked. The two days each flew by quickly.

I’m not going to attempt a content overview – that has actually been nicely done by Eric Brody here. And PharmaExec on-line gives a nice quick scan here, including some of the juicier quotes. Suffice it to say that the speakers were diverse, knowledgeable, and well-chosen. I’m saving my two thumbs up for the following:

This event was tight. By that, I mean it was run incredibly efficiently and smoothly. Sessions started on time, ended on time, did not drag, and the speakers were clearly prepped with directions to keep it focused and well-structured. The audio/visual setup was one of the best I’ve seen, even to the point of having a photographer going about the entire time taking a tremendous variety of pictures (immediately uploaded to Flickr). The Wi-Fi was strong. There were outlets/extension cords along one entire side. There was a Twitterscreen. Sessions were captured on video. The attendee goodie bag was one of the best ever, including several books, and even an iPod Touch! There were standard presentations, panels, interviews, open forums, 1-on-1 sessions, and even a Pecha Kucha (20 slides, each for 20 seconds) slot. Vendors had a chance to briefly show their wares up front, which is a great way to give them exposure without turning sessions into sales pitches. All in all, other conference organizers could learn a lot from this freshman endeavor. Kudos to Kru & crew for pulling this off.

This event was well-targeted. It’s way past time to start bringing together people from the pharma/device industry, the ePatient community, and other stakeholders in healthcare. Hearing from bloggers with medical conditions, and getting their perspectives (not only on stage, but actively throughout the conference on Twitter), was both inspiring and enlightening. Folks on the business side and on the consumer/patient/people side need to better understand one another, and this was a very helpful format to move the dialogue forward. The fact that we had a late entrant show up from FDA/DDMAC (Paul Loebach, a really nice guy) was a huge bonus.

I had the privilege of co-facilitating, with Jack Bilson and John Mack, two lunchtime discussions on Developing Guidelines for Social Media. Those sessions could have gone on for hours – very rich interaction and a high level of interest among the participants. But, of course, everything was running on time (I told you it was tight!), so we had to move along by 1:45 pm!

It does seem to me, after the last few weeks, that we really have turned the corner when it comes to use of Twitter in pharma/healthcare industry conferences, as there was an incredibly active and informative Tweetstream (hashtag: #ePatCon). Many, many people were “tuned in” to parts of this conference from around the globe, and participating virtually. And, of course, we enjoyed social occasions and a tweetup, where many of the pharma “early adopters” renewed friendships or met each other for the first time – always very rewarding.

This event was an exhausting and exciting pleasure to be a part of. Looking forward to the sophomore edition!